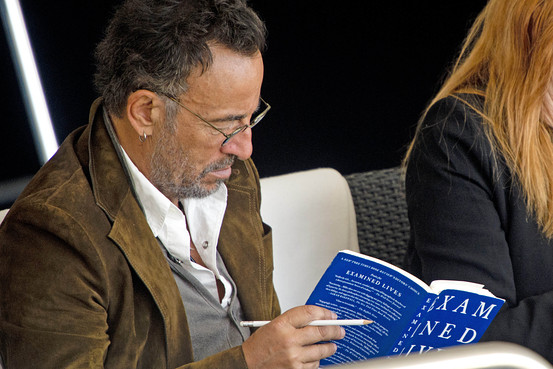 The musician and author of the new picture book “Outlaw Pete” likes reading about cosmology: “I find men and women struggling to answer the deepest questions we can ask freeing.”

What books are currently on your night stand?

I just finished “Moby-Dick,” which scared me off for a long time due to the hype of its difficulty. I found it to be a beautiful boy’s adventure story and not that difficult to read. Warning: You will learn more about whales than you have ever wished to know. On the other hand, I never wanted it to end. Also, “Love in the Time of Cholera,” by Gabriel García Márquez. It simply touched on so many aspects of human love.

I like the Russians, the Chekhov short stories, Tolstoy and Dostoyevsky. I never read any of them until the past four years, and found them to be thoroughly psychologically modern. Personal favorites: “The Brothers Karamazov” and, of course, “Anna Karenina.”

Current favorites: Philip Roth, Cormac McCarthy and Richard Ford. It’s hard to beat “American Pastoral,” “I Married a Communist” and “Sabbath’s Theater.” Cormac McCarthy’s “Blood Meridian” remains a watermark in my reading. It’s the combination of Faulkner and Sergio Leone’s spaghetti westerns that gives the book its spark for me. I love the way Richard Ford writes about New Jersey. “The Sportswriter,” “Independence Day” and “The Lay of the Land” are all set on my stomping grounds and, besides being poignant and hilarious, nail the Jersey Shore perfectly.

Who are your favorite New Jersey writers?

Roth for his bawdy, rowdy humor, excellence and longevity. Ford, as I mentioned above; and of course Walt Whitman is pretty good. The summer always makes me want to pick up “Leaves of Grass” for a while and sit on the front porch. I come away happier.

What book, if any, most influenced your decision to become a songwriter and musician or contributed to your artistic development?

I skipped most of college, becoming a road musician, so I didn’t begin reading seriously until 28 or 29. Then it was Flannery O’Connor; James M. Cain; John Cheever; Sherwood Anderson; and Jim Thompson, the great noir writer. These authors contributed greatly to the turn my music took around 1978-82. They brought out a sense of geography and the dark strain in my writing, broadened my horizons about what might be accomplished with a pop song and are still the cornerstone literally for what I try to accomplish today.

I’m not familiar with the musician/novelist, but as far as memoirs, it’s hard to beat Keith Richards’s love of music that shines through in “Life.” I also found Eric Clapton’s autobiography to be surprisingly revealing and very moving. Of course I loved Bob Dylan’s “Chronicles.” It made me proud to be a musician.

What books might we be surprised to find on your shelves?

I read a lot on cosmology and a reasonable amount of philosophy. I also like to read about baseball, having just finished Mariano Rivera’s autobiography. For cosmology, “Lonely Hearts of the Cosmos,” by Dennis Overbye, was one of my first favorites. I find men and women struggling to answer the deepest questions we can ask freeing. It also puts in scale whatever my small problems of the day might be. The book that turned me on to philosophy was Bertrand Russell’s “The History of Western Philosophy.” I just finished “Examined Lives,” by Jim Miller, and “How to Live; Or, A Life of Montaigne,” by Sarah Bakewell.

What are the best books about music you’ve read?

At the top of my list remains Greil Marcus’s “Mystery Train,” followed closely by Peter Guralnick’s “Last Train to Memphis.” I’d include Dylan’s “Chronicles” and a recent book by Daniel Lanois, “Soul Mining,” that gives insights into the making of music I found unique from any other book out there. “Sonata for Jukebox,” by Geoffrey O’Brien, has some lovely chapters in it, particularly its opening discussions of Burt Bacharach’s career.

What’s the last book you read that made you laugh?

Richard Ford’s “The Lay of the Land.”

The last book that made you cry?

The last book that made you furious?

“Too Big to Fail,” by Andrew Ross Sorkin; Michael Lewis’s “The Big Short”; and “Someplace Like America,” by Dale Maharidge, with photographs by Michael S. Williamson. These are a few of the books I read on the recent financial collapse, and I contributed the foreword to “Someplace Like America.” The criminal outrage and recklessness described in these books led directly to my “Wrecking Ball” album.

What kind of reader were you as a child?

The first book I read was “The Wizard of Oz,” one lazy summer on my front porch on Randolph Street in New Jersey. I remember being thrilled by the book and the act of reading. Over time my most beloved character became the great and powerful Oz himself. He’s summed up by that great quote that’s in the film, but not in the book: “Pay no attention to that man behind the curtain.” He’s a carny phony, in way over his head, who manages to pull it off anyway. “Pay no attention to that man behind the curtain.” One of the great quotes in American literature.

If you had to name one book that made you who you are today, what would it be?

One would be difficult, but the short stories of Flannery O’Connor landed hard on me. You could feel within them the unknowability of God, the intangible mysteries of life that confounded her characters, and which I find by my side every day. They contained the dark Gothicness of my childhood and yet made me feel fortunate to sit at the center of this swirling black puzzle, stars reeling overhead, the earth barely beneath us.

Philip Roth, Keith Richards, Tolstoy — and one extra, Bob Dylan. A lot of life experience there, and the babbling in different tongues would be wonderful.

What books do you find yourself returning to again and again?

I don’t read many books twice, but Jim Thompson novels — due to their concise, dirty power, their relentless violence and purity — can always draw me in for a second time. Some of the most psychological crime writing ever done. I love James M. Cain and Elmore Leonard, but Jim Thompson holds a special place in my heart.

What books are you embarrassed not to have read yet?

I read “The Grapes of Wrath” very late, long after I’d written the song “Ghost of Tom Joad.” However, it ended up being everything I’d hoped it to be. I haven’t read “East of Eden” yet, and I’d like to.

What do you plan to read next?

I loved “The Adventures of Augie March,” by Saul Bellow, and someone just gave me “Henderson the Rain King,” so that may be up next.